Recognition: In the last 10 years Sen Shombit has exposed his Gesturism Art in different countries such as Japan, Italy, Austria, France, Canada and India. He has been selected to showcase his works in numerous famous French Salons (created by King Louis XIV inside the Carre de Louvre) in Paris such as Societie Nationale des Beaux Arts, Salon d’Automne and Salon des Art Capital.

Early life: Sen was born in 1954 in a refugee camp near Calcutta with no potable water, no electricity, no sanitation. In such an environment his dream of becoming an artist seemed unattainable. Close to his refugee camp, at age 12, he suddenly discovered Chandannagore, the erstwhile territory of France. So the French artistic wave and culture grabbed his subconscious mind from an early age. Against all odds he persisted with sharp focus on art, and drove himself to get admitted to Government College of Arts and Crafts in Kolkata (first Western art college in India since 1860).

In search of his dreams: At age 19, with $ 8 in his pocket and his first paintings under his arm, Sen landed in Paris. Without papers, without work, without friends, Sen was nevertheless sure of his destiny to be in art in France. He was first illegally employed as a sweeper in a lithographic printshop by its kindhearted proprietor who was impressed by his paintings. Here he rubbed shoulders with painters such as Leonor Fini, Alain Bonnefoit, Yves Brayer and many others. At the same time, he studied at the École nationale supérieure des Beaux-Arts (1974-76) and Academie Julian Penninghen (1975-77). French art and culture became his foundation of life. Simultaneously with his creative work, he had to pursue applied art as a designer for livelihood earning where he very successfully worked for the biggest French and international brands across the world. Sen lived in France from 1973 to 2003, became a French citizen in 1984, and now divides his time between India and France.

Inspiration: Intensely searching for an ideology of his own to transcend Post Modern Art in France, Sen immersed himself totally into Western European, particularly French art movements since 1870. Imbibing the creative discipline of art in France, he understood that it is important for a painter to have an ideological anchor for his new artistic vision.

Vision: He started to create a new vision of art from 1994; he called it Gesturism Art. Grappling with contradictory cultures, Sen has a way of painting without limits to show that which is not seen, but which is nevertheless essential. His painting practice is akin to inherently spontaneous writing that freely flows from imagination, just as Gesturism Art is his personal pictorial narrative. 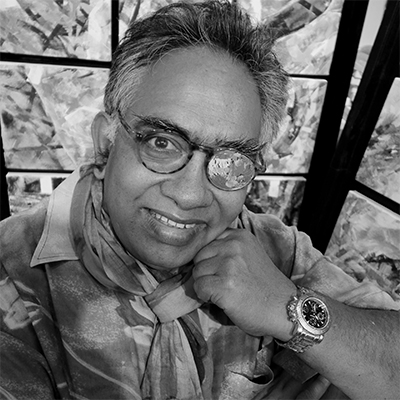