Alain Dahan relies on serendipity, craft and intuition to map out what would otherwise seem like an uncertain path for a visual artist. Having worked for over 20 years in cinema and photography, Dahan found his distinctive visionary style in 2012 when he turned to digital photography as a creative rather than strictly professional medium. Enabled by his previous mastery of digital tools, his career as a photo-based visual artist developed quickly.

Dahan's first show at Montreal’s Gallery 203, Take 2.0, in 2012, was a series of colorful digital prints inspired by the contrast between urban decay and new urban growth and development.

His latest series, Naked Silver, continues to explore the same themes of old and new. The body of work consists of a series of nude photographs inspired by the work of Renoir and Rodin but by printing with black ink on metal, the effect provides a distinctly contemporary and strikingly luminous imagery that is almost holographic in feeling.

The project began as homage to Dahan’s friend and mentor, Karl Phillip Duarte, who prior to his death had been developing a book of nude photography. In order to commemorate Duarte’s passing, Dahan embarked on his own process of photographing nudes.

These innovative, futuristic prints were not his first take on the subject, the artist waited for the serendipitous “voice of inspiration” to help him find the new medium. Thankful for the fervor that the metal prints caused at the photo laboratory, Alain knew that his art was on an exhilarating new path.

Alain Dahan is a visual artist, photographer, filmmaker and musician living and working in Montreal. He has worked professionally with artists such as James Franco, Halle Berry and Angelina Jolie. His work has been featured on ArtBomb Canada, shown at Masterpieces for MADA, Automobilart, Tom's shoes for Art, Gallery 203 & Art Fusion Galleries in Miami. 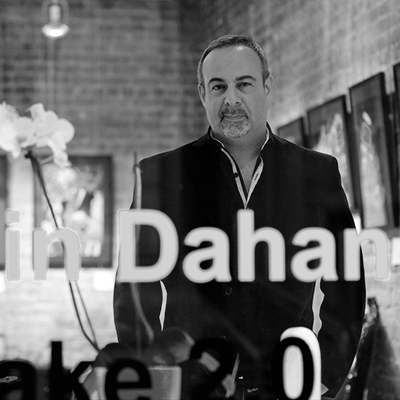